Before 18 year old Billie Eillish was humbly accepted yet confused that her album was 2020 Grammy Winner for Album of The Year she was just a different being altogether. Her vocals are ethereal, haunting, yet heart wrenching. Her lyrics are multidimensional. People wonder who is Billie Eillish. Well, rumors circle and white noise ensues. She’s certainly not a , , or a

In 2016, she burst onto the pop charts with music she wrote and produced with her older brother Finneas. Her first single Ocean Eyes was released via Soundcloud and was written by Finneas for his band but he gave it to Billie since she was looking for a song she could choreograph a dance to.

The rest is her story…

Billie Eillish’s musicality is a mix of pop, alternative, electropop, trap, and EDM.

Her soprano vocals steal the show and grab hold of your insides. They are ethereal, husky, almost whisper-like, a slurring voice that can be thinned out to reedy.

Most people have compared her to Lana Del Ray which she welcomes with a big bright smile saying that one of her biggest musical influences is Del Ray. 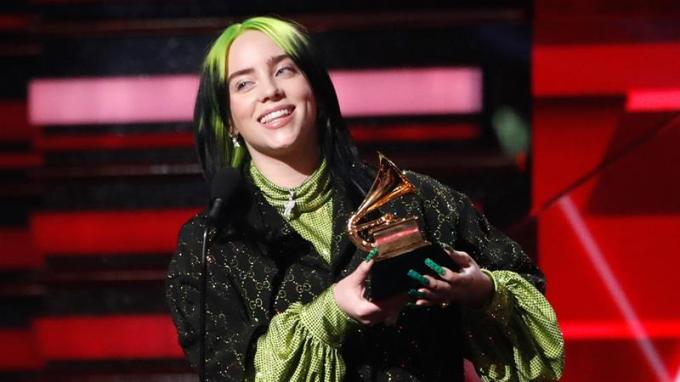 FINNEAS also won a Grammy for Best Producer of the Year, Non-Classical.

GIVEAWAY!!!
Win a Copy of Billie’s Grammy Winning Album! [Open to 1/27/20 to 2/3/20] International Entries Accepted. Follow both terms to qualify.
Entry-Form
Song by Song Review
As always, click the title to be linked to audio of each track.
!!!: A 14 second track that showcases the artist’s sense of humor while simultaneously introducing the album.
Bad Guy:  A pop & trap song which uses a bass, a kick drum, and amplified finger snaps. When I first heard it, I instantly thought it sounded somewhat familiar and recently it has been revealed that this song was based off the theme song for Disney Channel original series Wizards of Waverly Place. Eilish uses anything to create a song as seen throughout this album. The lyrics showcase the meaning of being the “bad guy”: not fitting in, feeling out of place, being more masculine than your male counterparts but both Eillish and her brother have said that this song is about someone who always has to say what they are, aren’t truly bad, etc. Who someone is comes off in the way they present themselves and not in what they constantly have to convince themselves they are.

This song was introduced to me by my younger sister and then played often at work by a coworker. It was my first intro into this artist’s music but instantly made me want to uncover all the layers of Billie Eillish as an artist and open every crevice of her musical Pandora’s box.
My favorite thing about this song is the spoken word “Duh” heard throughout the track.
It even inspired me to get this T-shirt which I proudly wore last night while watching the Grammys. 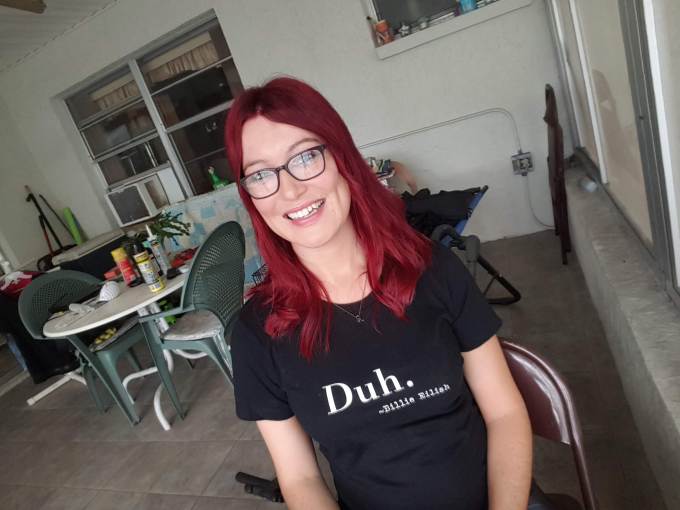 Xanny: The song’s minimal instrumentation includes sparse bits of bass guitar, piano, and dirty bass synth, along with an heavy 808 bass on the bridge, while Eillish’s vocals are slow-paced and slightly off-beat. It explores irresponsible recreational drug use. 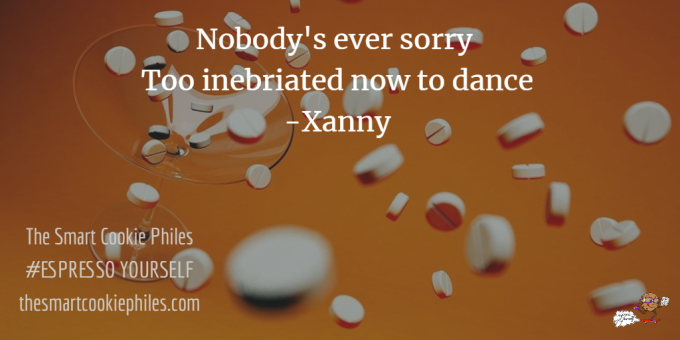 You Should See Me In A Crown: My favorite song on the entire album because it instantly has that “SHIT IS ABOUT TO GO DOWN” feel. A hip-hop & trap song featuring Billie singing over blaring synths and rapid fire hi-hats. The lyrics were inspired by the show Sherlock. 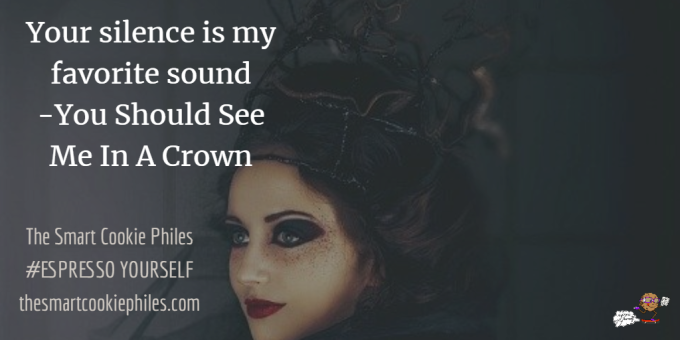 All The Good Girls Go To Hell: punchy piano number exploring the idea of God & the Devil observing human beings and wondering what they are truly trying to achieve. When asked for a deeper meaning underneath the symbolism, this track discusses the epidemic of climate change. 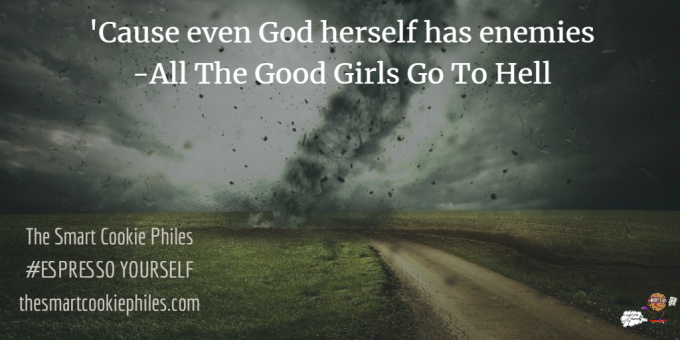 Wish You Were Gay: A goofy song about being rejected by a guy she liked and wanting an explanation.

After the song came out, she found out the muse behind the track came out to his family and friends because of the song.
When The Party’s Over:Before I heard this full track, I saw it visually on the show So You Think You Can Dance
A heart-wrenching track about the distance between you and another person. A piano ballad with choral influences, it is entirely hauntingly beautiful.

8: A ukelele-based lullaby in which her vocals are manipulated to sound like a small child. It is written from the perspective of someone she hurt. The lyrics discuss someone not seeing you for you while you would have given them the world just to get them to smile.

My Strange Addiction: A bass heavy pop song inspired by the American sitcom “The Office.” It contains samples from the episode “Threat Level Midnight,” which the entire cast gave personal permission for Eillish to use.

Bury A Friend: Minimalist Electronica and Industrial Track written from the perspective of a monster under the bed. It details a confusing relationship. 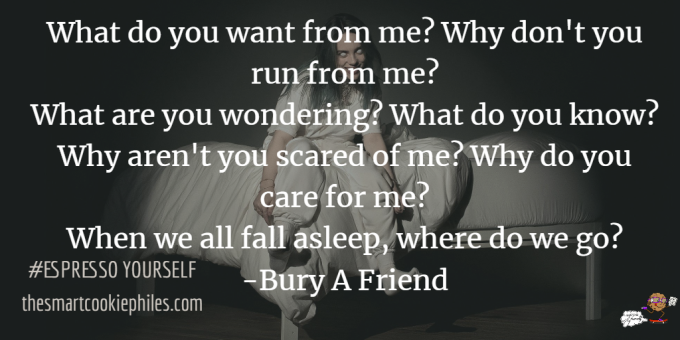 Listen Before I Go: A hard to listen to song based on the idea of Billie committing suicide and what she would say to all her family, friends, and fans. It features a gentle piano accompaniment and jazz influences, containing faint street noises & sirens for ambiance.
Billie recently struggled with the thought of ending her life while struggling with the overwhelming pressures of fame. She talked herself out of it after crying and thinking of her mom.
As someone who also has struggled with, and continues to struggle with mental illness including suicidal thoughts, this song hits home for me because it makes the idea almost real in a sense. 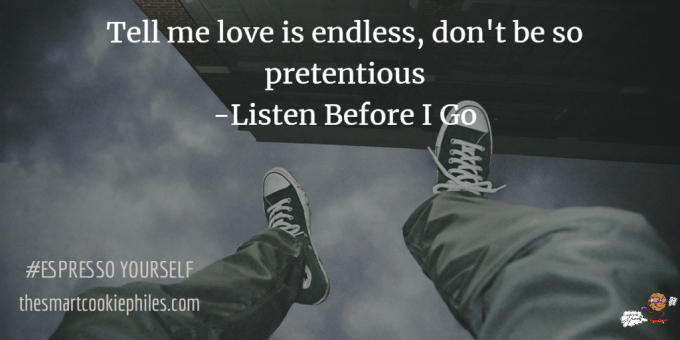 I Love You: An acoustic ballad that explores the struggles and feelings when you realize you are in love with someone, someone you shouldn’t be. Goodbye: It features lyrics from each song on the album reversing as if rewinding a cassette tape to start it over.
Although only included on the Japanese version of the album, my favorite Billie Eillish song is Come out and Play
It’s soft, and the lyrics are timely, almost autobiographical in a sense.

Overall, we can see now who Billie Eillish is. She’s brillant, an enigma, creative, artistic, and someone who is self-aware of her feelings and how they affect those around her.
She wears loud colors in her hair and is just a young talented female who wants to share her art with the world.

Don’t ever discount or minimize someone’s abilities because they are different than you.

If this year’s Grammy Awards could be summed up in a single sentence, it would be that.

3 thoughts on “#Grammys Young Creative Billie Eillish Sweeps Four Major Awards For Album When We Fall Asleep, Where Do We Go? (Album Review)”