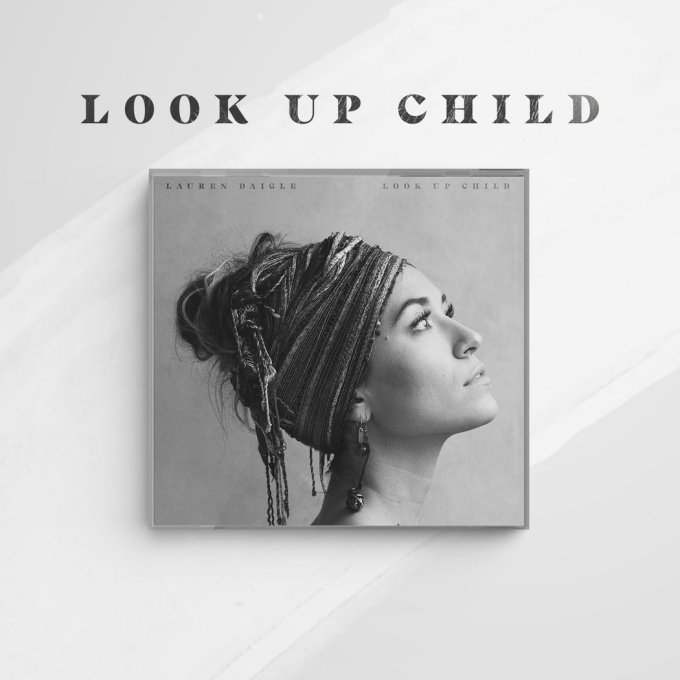 Hailing from Lafayette, Louisiana and was influenced by Zydeco, blues and Cajun music in her environment from youth, Daigle was born to be a musician.

Her mother referred to her childhood home as “the music box” because she was always singing. She never considered music seriously until she contracted infectious  mononucleuosis. It kept her out of school for nearly two years.

Following finishing charter school with hopes of working in the medical field and do mission work, she took a year off from school to do mission work in Brazil before attending Louisiana State University for child and family studies.

She joined and soon led the choir at LSU.

Look Up, Child debuted at No. 3 on the Billboard Hot 200 with “You Say” staying at #1 for fifty three weeks on the Hot Christian songs chart and further won a 2019 Grammy for Best Contemporary Christian Music performance/song.

Look Up, Child was released on September 7,, 2018 via Centricity Music.

Still Rolling Stones: A song about how God’s power is both infinite and infallible. Daigle performed this song on The Ellen Show live.

Rescue: Showcasing the aspect of God’s willingness to go to great lengths to rescue us, even when we think no one can hear us. It is performed from God’s perspective. The song was written for people that are experiencing the darkest of turmoil, and in that collision, a comfort comes.

This Girl: A soulful song about wanting to let God know out of everything, she wants Him to know she is fully and completely offering her heart.

Your Wings: A song with multiple references to Psalm 91 about how God promises to cover those who trust in him. Daigle said the musicality and the beat are her favorite on the whole album. You Say: A song discussing the question and identity and how a believer’s foundational truth regarding their identity should come from who God says they are.

Everything: A song written for when you are overwhelmed in a time of deprivation and weariness.

Love Like This: One of my favorites off the album for its musicality that, in my opinion, mimics a spiritual awakening and for its message about God’s unconditional yet unthinkable love. 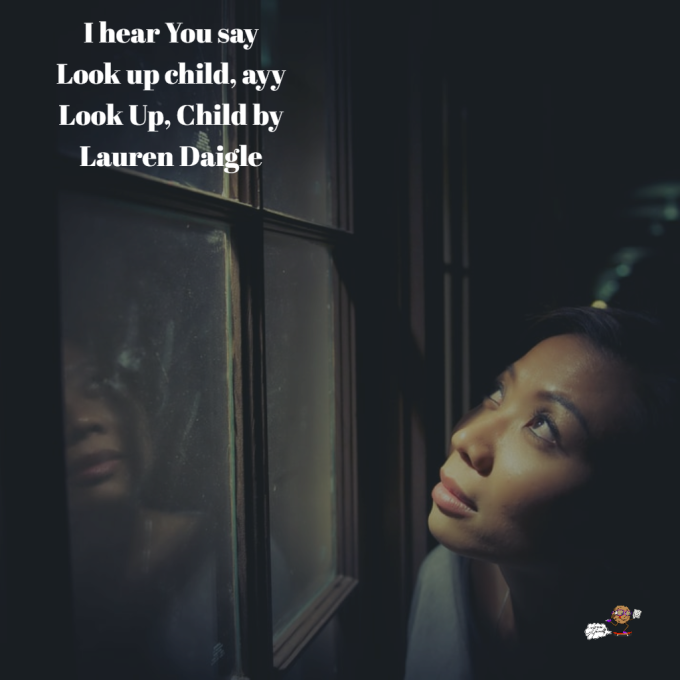 Look Up, Child: A fun Carribean style musicality makes up this upbeat track about looking to God always whatever the situation.

Losing My Religion: My favorite song on the entire album for its message about how when you truly know Christ, it becomes more about a faith relationship and less about religious ideology.

Remember: Co-written with Chris Tomlin, this gospel-like anthem brings all miracles past and present into recollection so the believer can focus on God’s almighty power and know he works for the good of those that love him.

Rebel Heart: A declaration of faith to God saying that I’m ready to trust you completely and take this “rebel heart” and make it new.

Inevitable: A song about fighting doubts and unbelief with the truth, “God will always carry me.”

Turn Your Eyes Upon Jesus: Lauren finishes the album with her own rendition of this Helen Holsworth song.

Whether you are struggling to see the good, focus on the present, or are being bombarded by a heavy and black sadness, whatever you are struggling and suffering with mentally, emotionally, and/or physically, Daigle’s second album offers a song for whatever it may be and as you begin to sing along, a spirit of praise will rise up within and the clouds will start to break, and the light will peak through slowly but surely.

Called the best blues album of 2017 by AllMusic, Signs is Lang coming back from previous works that had a more gospel feel to his blues roots that got him a record deal at only 16.

Make It Move: A bluesy rock song about the mountains in your life and how you got to make it move and stop waiting around for things to happen.

Snakes: Bluesy rock and roll song reminiscent of “Hound Dog” by Elvis Presley about snakes in the grass or the things in life that try to get you off course.

Last Man Standing: A fast-paced bluesy song about fighting through the hard times.

Signs: Soulful track about the signs of the times we are living in may be end times.

What We Are Made Of: A song about how the trials of life help show what you’re made of.

Bitter Ends: A soulful song with a gospel feel questioning the various motives of humans; the why behind what we do.

Stronger Together: A cheerful gospel like track about how we’re made to love and be loved.

Into The Light: Another gospel like track about the struggle between good and evil.

Bring Me Back Home: A soft piano ballad about coming home to the person you love.

Wisdom: A slow song about the power of wisdom

Singing Songs: An acoustic finale to this album

Released on July 26, 2019, Andy Grammar is known for his trademark positive vibes. His fourth studio album Naive explores that ability to see the good in everything. As of August 10, 2019, the album peaked at #6 on the Billboard Hot 200 chart.

My Own Hero: Bluesy soul musicality paints a lyrical depiction of being the only person you can count on.

I Found You: An upbeat pop song about having everything you can want in the world but it only matters now because you’ve found the person who makes it all make sense.

Some Girl: A soft ballad with electropop musicality about how some stranger becomes your everything. A song Grammar wrote about his wife.

Wish You Pain: A song about wishing growth and progress on those you love. Grammar wrote this song for his daughter.

Don’t Give Up On Me:  A love ballad about not giving up on the potential or the love between two people. The song was featured in the motion picture, “Five Feet Apart.”

She’d Say [ft. LadySmith Black Mambazo]: A soulful pop song about an older family member that passed on and the wisdom they would pass on to the new generation if they were still here. Grammar wrote this for his daughter about his mother Kathy that has passed on.

I am Yours: A ballad about being fully and completely one with someone. It has the makings of the perfect wedding song.

Spotlight [ft. Swoope and Andy Mineo]: An upbeat pop song featuring Christian rapper Andy Mineo about social media and how it makes us crazy chasing the high of constant attention.

First Time: My favorite song on the album because it explores the idea of a heartbreak but witnessed from the other person’s perspective.

Stay There: A song about the increasing shallowness of the hook-up with no commitment culture and how rare it is to find someone who stays.

Born For This: A song about believing in yourself even when you are faced with doubts.

Best of You: An acoustic song with country musicality about loving the good in someone no matter what. 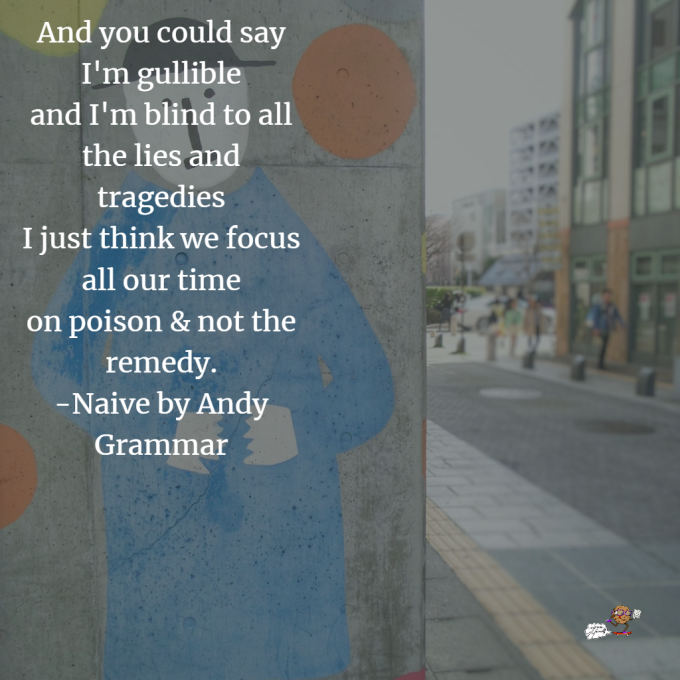 Naive: The title track about seeing the good in everything no matter what backed by a soft acoustic musicality.

Grammar’s fourth studio album shows a maturity and growth characterized under his exploration of what the world labels naivete. Every track carries the theme and does not disappoint old and new fans alike of Grammar’s.

Willie Handler is no stranger to writing books that make you laugh but the second novel from this author is nothing less than an out of this world story that will have you shaking the cosmic dust off your space boots.

Dixon Jenner is a thirty two year old chef who gets recruited by NASA in the year 2039 for a Mars mission that goes terribly wrong  to his spaceship explodes and he is the only sole survivor.

Right away, he is high from a marijuana infused brownie and he has to figure out what to do to survive post-explosion. He meets two martians Bleeker and Seepa and from there they hide him from the head martian Cheytno to avoid anyone finding out he is from Earth.

What ensues is a hilarious story that leaves space for countless belly laughs over martians learning more about earth-like customs from an American chef from Toms River, New Jersey.

I was hysterically laughing by page three and I could not find a good reason to put the book down. 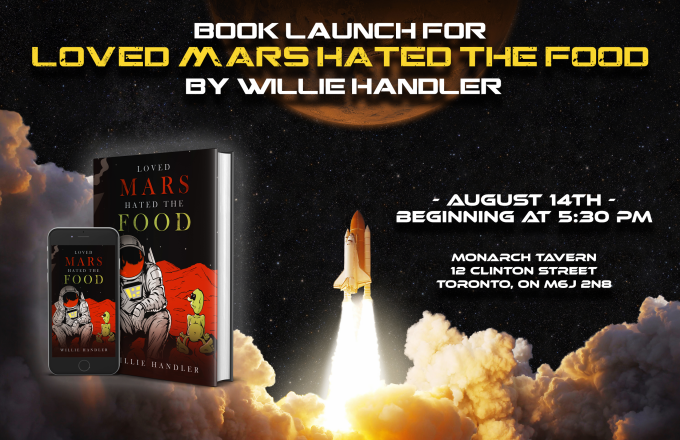 It’s definitely a book with a brilliance not yet experienced on this planet but no matter who you are, human or martian, Handler’s writing will keep you hooked from start to finish.